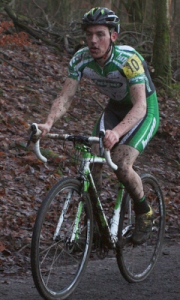 The 18-year-old Teeside rider (pictured) crossed the line almost two minutes ahead of his nearest rival, and to underline the quality of the young riders on show, second spot went to Orange Monkey pro Billy Harding, who at 17 years old was also top junior.

Thompson and Harding got away on first lap and opened a gap heading into the second circuit, but Thompson soon broke clear and never looked back. Ian Taylor (Jedi Cycle Sport) was third on lap one but had chain trouble and dropped back to ninth, and spent the rest of the race battling back. He closed down Harding and had his sights set on second, but in a thrilling sprint finish Harding just held on.

Mike Simpson (GS Henley) stormed to victory in the vet-40′ race, leading from start to finish. Mike Young (Pedalsport CC) and Chris Taylor (Pedalsport CC) were close together for most of the race until three laps to go when Young got a gap and powered on to take second.

The Vet-50 race was perhaps the best of the day with Mark Horrocks and Wayne Nicholson trading the lead throughout. Both looked to have the race won only to be caught and passed. Eventually Nicholson got the significant break and held on for the win. Horrocks was second and Junstin Morgan third.

The Youth race looked set to be another close battle between Alfie Moses and Rob Scott as the duo rode clear on the opening lap, but Moses managed to open a gap and although Scott never lost sight of his rival, he was always playing catch-up from then on. Euan Cameron was the first under-14 home, whilst Connie Hurton was the first female rider to finish.

With muddy conditions across the course the pit crews were kept busy as the top riders switched bikes almost every lap, and several rear mechs bit the dust because of the thick mud.

Results queries etc to be sent to ycca@hotmail.co.uk – (please give as much detail as possible to help us)