Nick Barnes (Zepnat) took his first victory of this year’s Yorkshire Points with a comfortable win in Temple Newsham, Leeds, underlining his growing reputation in the sport. With the win came the Jonathan Noble Memorial Trophy, and with Nick’s family and former club, Seacroft Wheelers, putting on the event, it was a great day at the office for the 19 year old. 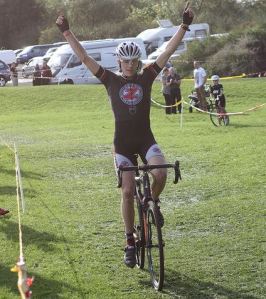 Barnes (pictured right) was at the front of the field from the start and was joined first by Dieter Droger (Scott) and the Jack Clarkson (Hope Factory Racing) to form a three-man break on the first lap.

The trio stuck together until three laps from the end when Barnes upped the pace on the first section of woodland, soon after the start/finish line and opened a gap on Droger, who in turn dropped Clarkson. Although he had to work hard for it, Barnes was able to increase the gap to the finish, where he claimed victory by 27 seconds. Droger, who won in the Notts and Derby League the day before, was comfortable in second and finished a minute ahead of Jack Clarkson in third.

In the veteran race, Danny Alexander (Zepnat) cruised to victory after Pedalsport duo Mike Young and Tim Kershaw had been the first to show on the opening lap. In the end, Alexander had too much for Young and went on to win by 35 seconds. The challenge of Kershaw fell away and he finished out of the top ten, not helped by a crash. Mark Horrocks (Hope Factory Racing) enjoyed a battle with Pete Wilkin (Fietsen Tempo) before finally getting away on the final lap to take top place in the veteran 50 category. Another Hope Factory rider, Annie Simpson was a very comfortable winner in the women’s race.

Earlier, Alfie Moses (Paul Milnes) and Robert Scott (East Bradford) worked well together to open up a gap at the front of the youth race. But the cooperation stopped on the last lap with some great technical riding from both riders. It all came down to a sprint in the last 50 yards and although Scott appeared to be holding off his rival, the bumpy run in to the line and Moses’ relentless pursuit combined to deprive him of the win right on the line. Lucy Horrocks (Hope Factory Racing) won the youth girl’s race. Unfortunately, the race was marred by a big pile-up on the start straight, which ended the race for several riders and sent Ben Dransfield off to hospital with a broken collarbone.

The event as a whole broke the record for the number of riders at a Yorkshire Points Series event, with 345 signing on (the previous record was 333 at Wakefield 2 weeks before).  Encouragingly, 100 of those were in the Under-12 races and 73 were women/girls.

We had a number of problems with timing the Vet40/50/Women race because riders did not sign for chips and shoulder numbers when they signed on – note to all riders, please don’t forget that a bib (shoulder) number and chip number must be written against your name when signing on. So, in the results spreadsheet for this race we have several riders without lap times (listed at the bottom) and several sets of lap times without riders (in the results under “mystery rider”). If you are one of these riders let us know where you think you finished. We have video of the finshing line as riders finished the race to cross-check against this. These, and all other results communications, should be sent to ycca@hotmail.co.uk